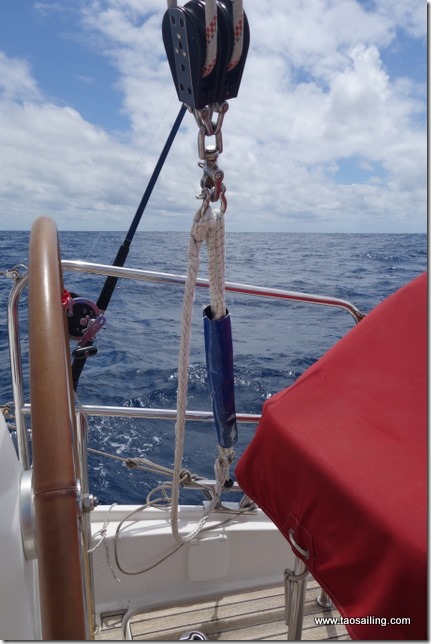 Coming from the unibody I had kept the habit of putting, on Tao, a hoist used boom by wind. It was struck between the central cleat and a bridge to the 2/3 the back of the boom... until the day when the cleat pulled out... and a buddy has folded its boom with the same technical!!!  As you learn by mistakes and especially what they cost us, this to triggered a reflection on the adaptation of this technique for a catamaran... which does not cash the oversales and other gitant errors!  So here is 6 months I'm sailing downwind with a "Bungee" boom...

The problem to be solved by wind:

a) moderate wind and seas: the boom has jolts from the bottom up, and back and forth, What is noisy, but especially prematurely use the Mule lives and all parts that wriggling in the process.

b) strong wind and rough sea: a best-selling in a low point... the sail deflates, mollie listening and the boom down... then at the top of the next wave, then the boat to idle, the wind comes back with force which inflates the sail suddenly, tightens violently listening and gives a great shaking in the rigging.

c) Despite the safety cap and adjustment of auto-pilot you are never safe from a start to the surge or stall driver which would cause a jibe... and Hello damage!

Therefore, a system for:

1) dampen the movement of the boom, but without blocking them in order to allow the boom go back and let escape the sail from the top

My solution is a "Bungee" shock absorber / restraint of boom: 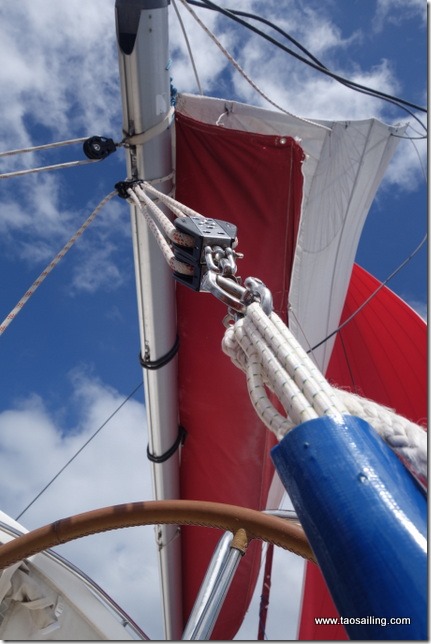 An elastic cushion... and a strop to restrain the boom. So several elastic large-diameter tips (bungee) with parallel a strop in Dynema which serves as safety stop. This will need to be struck between a cleat to the back of the boat and a secure bridge (or strap) on the boom, the closest possible to listen hoist. 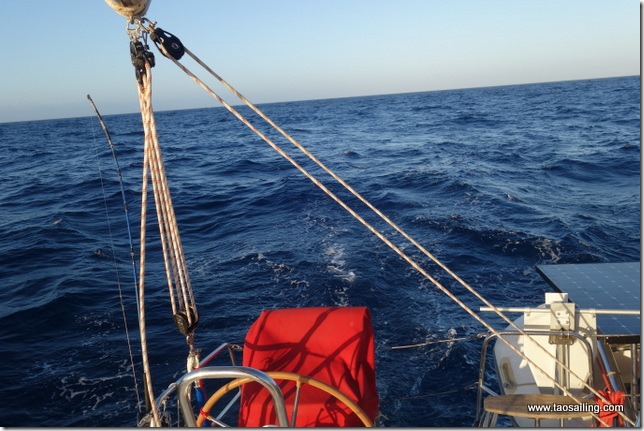 Realization of the "Bungee": 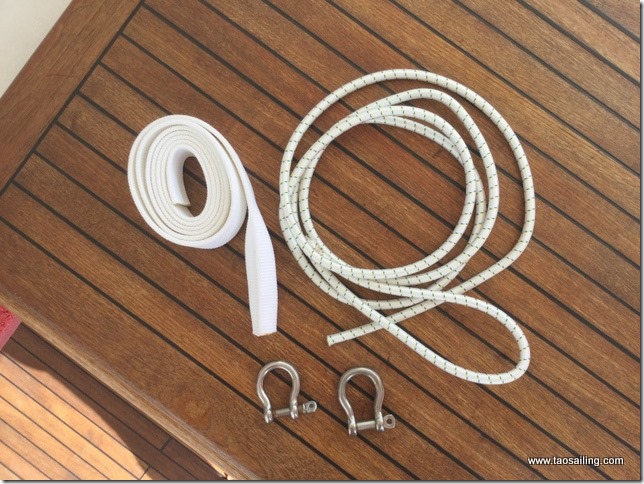 – 50 centimeters of diameter 4centimetres protection sheath (enough to pass 7 the elastic end strands) -the one in the photo was not large enough!

1) Make an eye at one end of the elastic end. 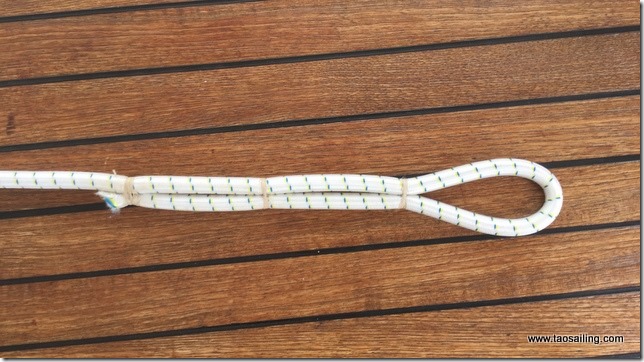 For this, fold it inward on a length of 20cm and make 3 surliures with big wire to sail by taking care of stung several times through the two layers of the elastic end. 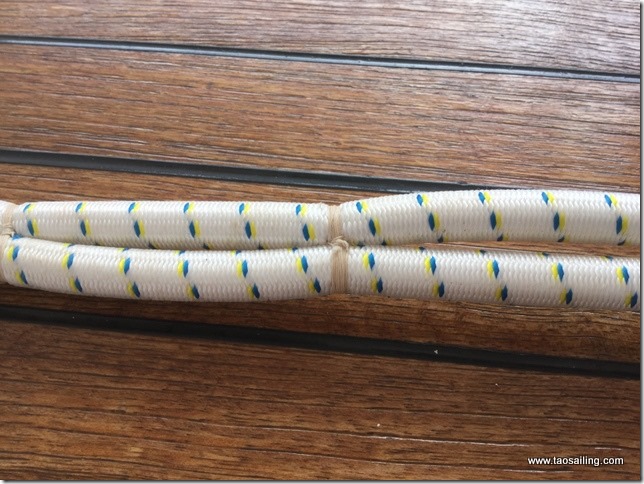 2) Fold the elastic piece on him even 5 times. Spend a Manila lyre in the eye and two loops that are on the same side. Hang the Manila on a fixed point.

3) Pull the free end and put on the sheath on the 5 strands. 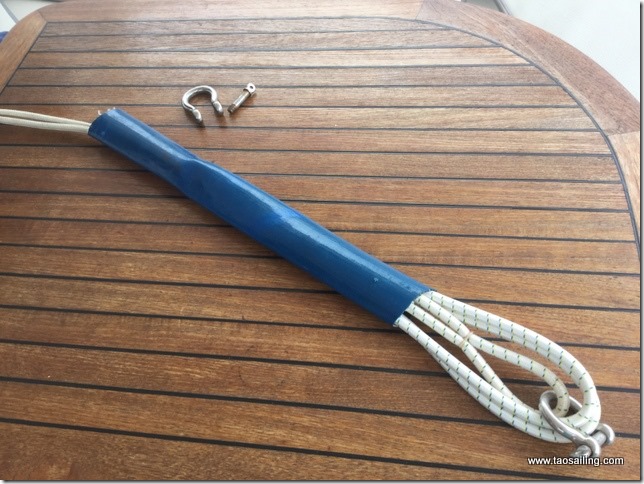 4) Adjust the length of the loops so that at rest they exceed a few centimetres of the sheath.

6) On the free end of the elastic to a look and 1) So what happens to the same length as the two loops. Cut the excess of elastic and move a Manila lyre in the eye and both loops. 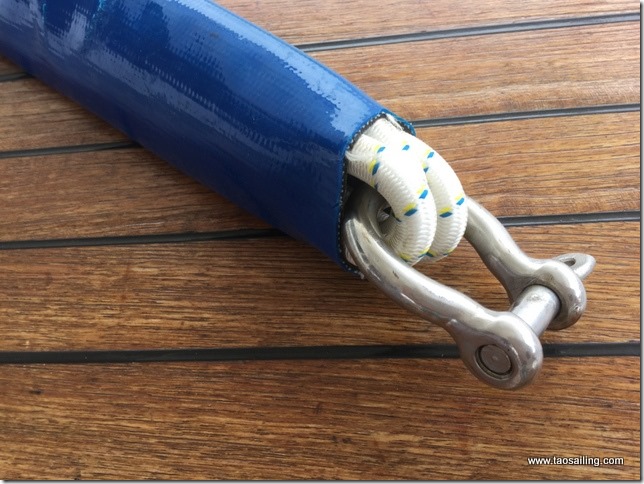 7) Make a strop in Dynema with an eye at each end to keep a distance between the 'eyes' of 1,10 meter (twice the length of the elastic to the rest). 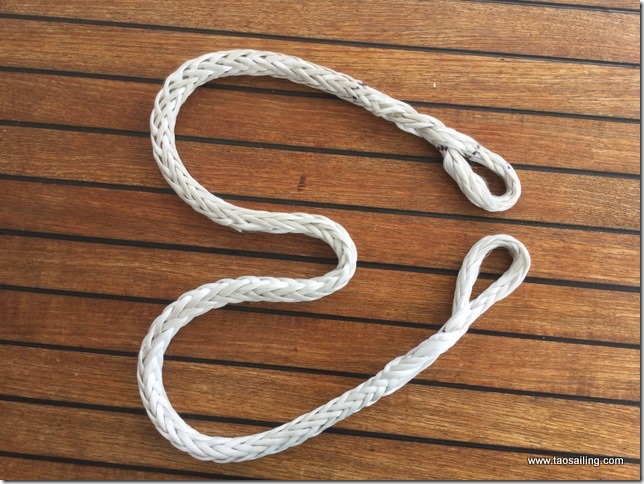 8) Pass each end of the strop in a Manila lyre.

This is the "Bungee" is ready. 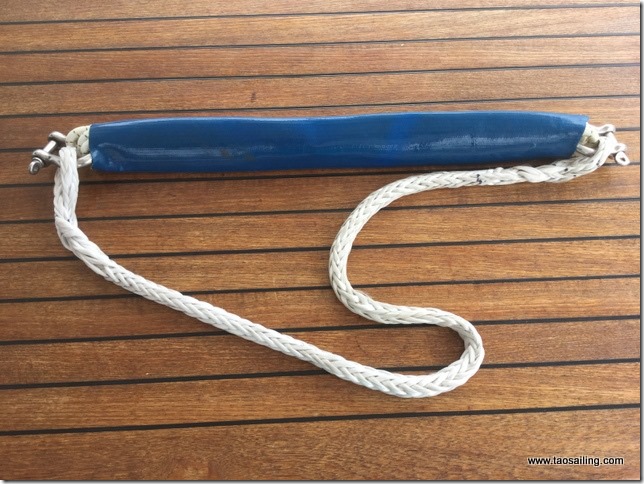 It remains more to hit one end on a textile Manila passed twice on a rear stop and put your hoist of restraint of boom between the other end of the "Bungee" and BOOM (as close as possible to listen to great sailing).

Of course, your comments, ideas to improve this system and other suggestions are encouraged... 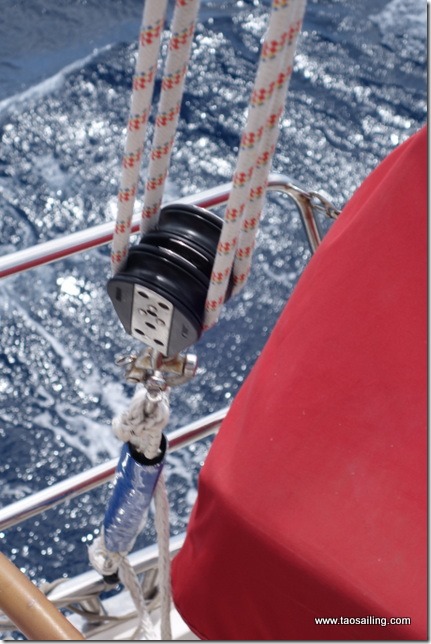 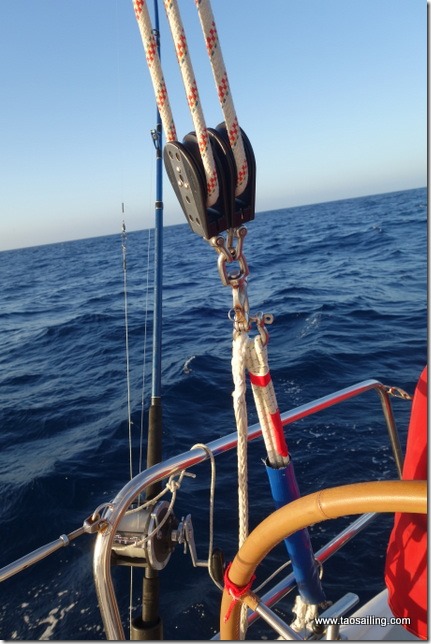 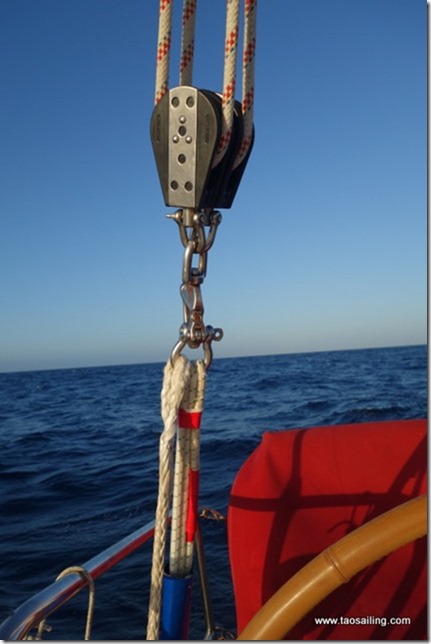