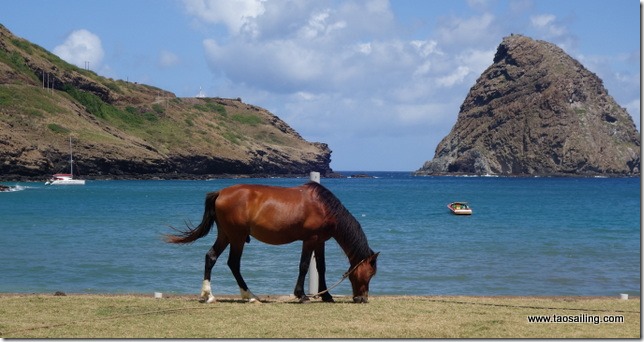 Ua-Huka berries are known for being very rollers... but the luck is with us and can spend a quiet week to discover the landscapes and museums of this welcoming island...

At first the island seems desert with peeled mountains on which horses graze quietly. The waves break on the rocky coast that seems unaffordable until it is in line with the narrow Bay of Vaipaee.

At the bottom of the Bay, a dock, a Green Valley... 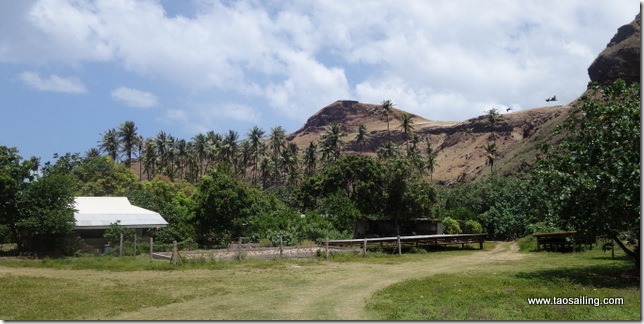 and a road leading to the village. 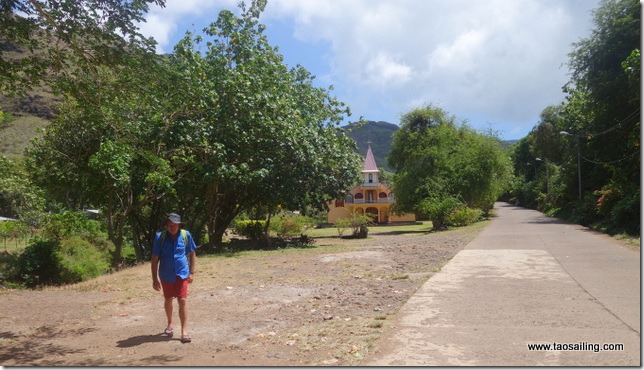 We take a quick peek inside the Church which is maintained and decorated in turn by locals.

The arboretum created the former Mayor "Léon" is 5 KMS from the village. It is known in all Polynesia for its diversity of local and imported plants. We have a lot of water and a few bananas dried in case no one would take a ride. The first car that passes takes us to the garden in a valley between former volcanoes. 3 employees maintain the site on a daily basis. 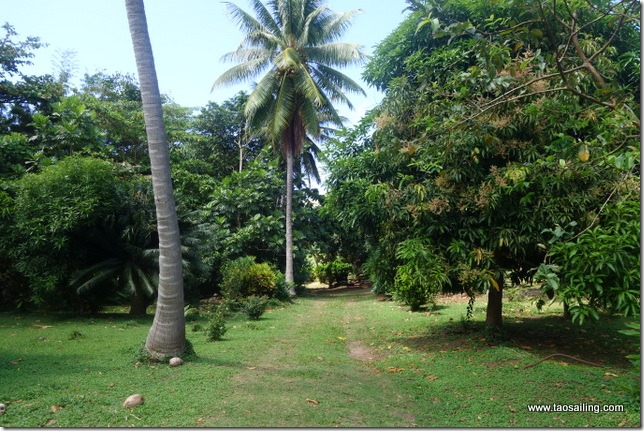 After a first garden manicured with a variety of trees and flowers identified by engraved plates, successive rows of fruit trees (mainly citrus from Corsica). 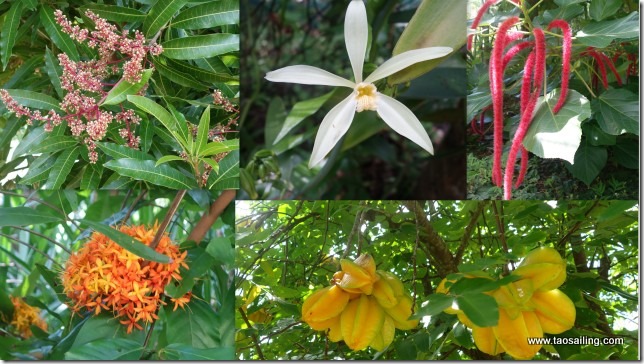 Since the new mayor was elected, all residents have the right to pick the fruits. We start with a few carambolas in our bags, the oranges and tangerines have already been collected. Then, on the trail we enter a dense forest of ferns and palms. 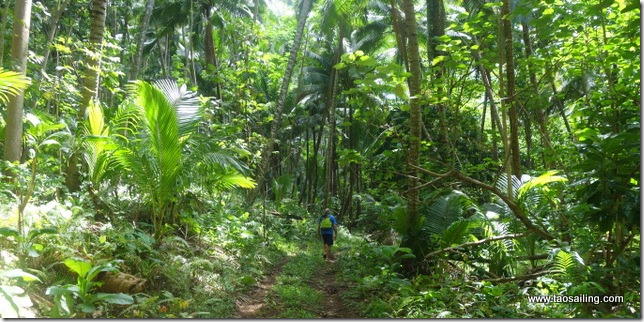 This is the place that we prefer, but mosquitoes are given some to heart joy and we whistling in the ears. It is time to turn back. 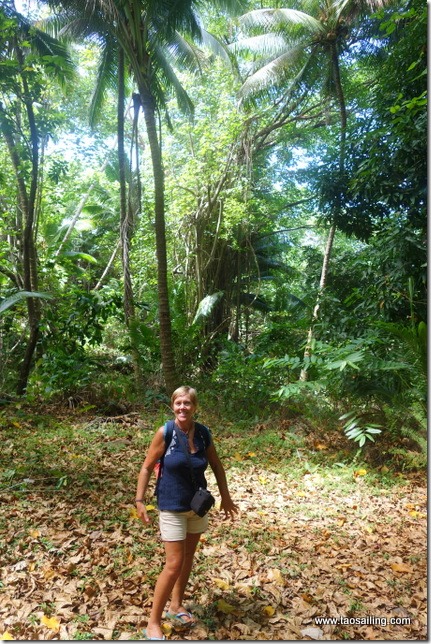 The Museum of Ua-Huka is one of the riches of the island. The boat "Aranui" made a stop at Vaipaee overnight and, In addition to supply for grocery stores, pours out its 200 passengers who trekked the island all day. Until the Museum is "taken over" by tourists, We go stop of the village. The Museum has be relocated on the arid plateau near the airport. 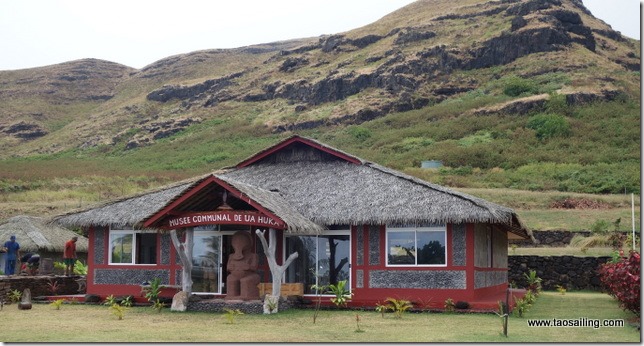 Next to it is a restored marae and an esplanade framed shelters for parties and ceremonies...

and the Tikis are everywhere ( Tikis whale, Tikis Happy

…) to protect us and guide our minds! 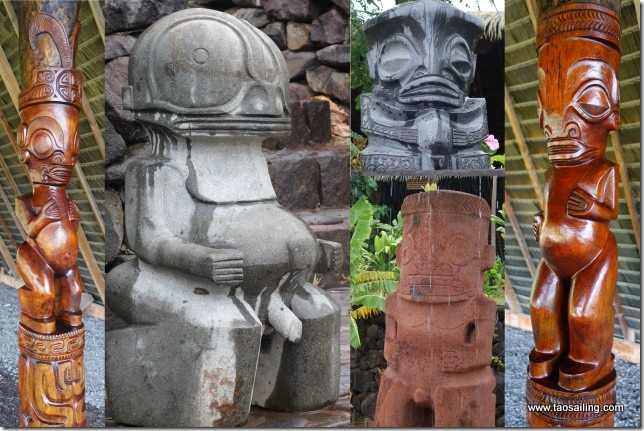 Joseph the "curator" of the Museum welcomes us warmly and answered all our questions about the origin, the art and traditions of the early Marquesans. 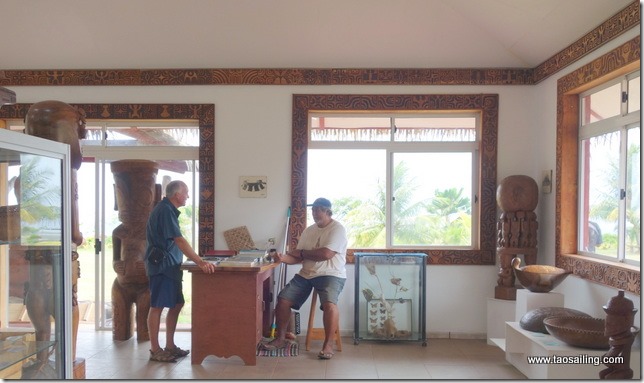 The rooms are clear with windows and reenactments combining period objects, copies of which are now on display in the largest museums of the world. 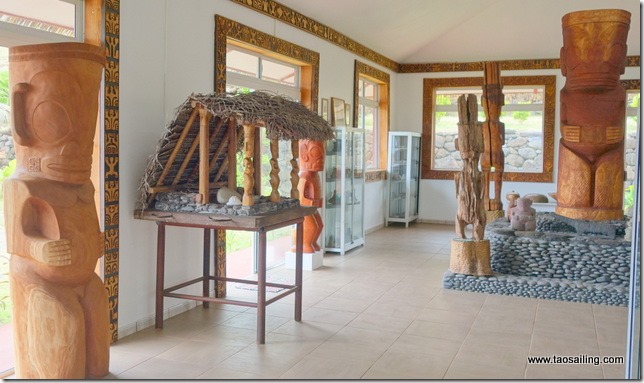 The whole is very successful and although not being fans of museums we go several times around... 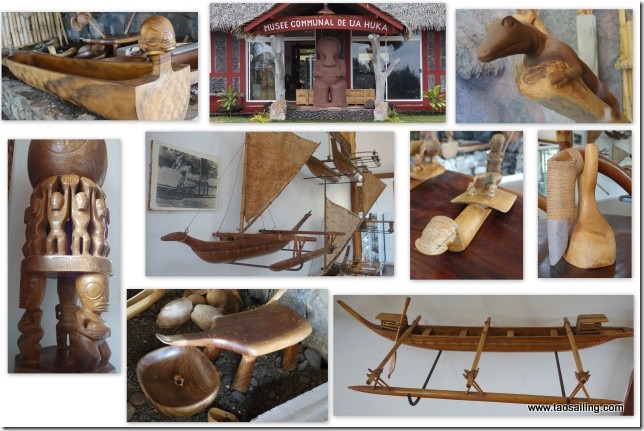 As expected, "the next morning the Aranui" shows up at the entrance to the Bay of Vaipaee. How will you he can enter this narrow goulet?  First we hear the anchor that descends in a roar of scrap, then the cargo is positioned across the Bay... before finishing his u-turn. Two barges are placed in the water to fix mooring lines on each side of the Bay. Now we can no longer leave the Bay! 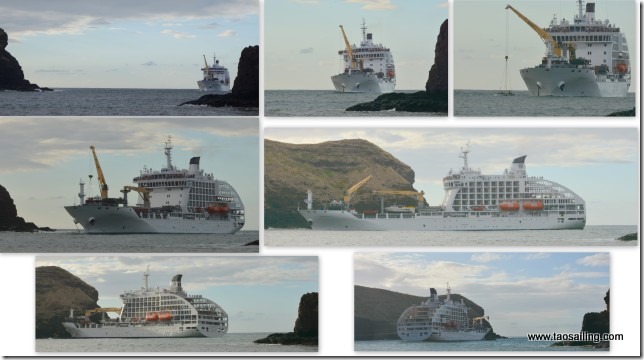 The arrival of the Aranui village takes 'life'. 40 pickup (decorated for the occasion) waiting for tourists to take them to the 3 corners of the island (There is only one road for 15 km along the South coast to link the three villages).  On the wharf inhabitants sell what to eat as well as a bit of craft. 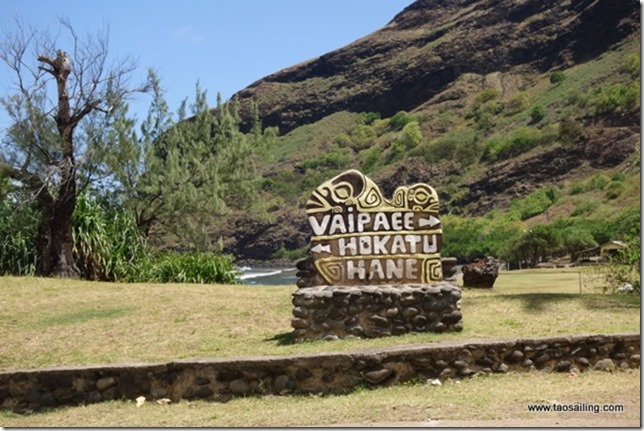 We are seeing the boat in all this excitement and eventually go ashore to stretch our legs until the next Bay inaccessible by road. Thanks to the "Hike and Bike" Navionics charts that we had downloaded, We spotted a walk of 14 KMS to do up to the Bay of Haavei. The trail climbs gradually 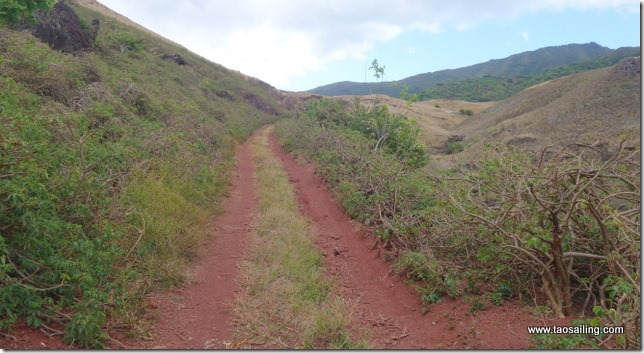 and after 30 minute walk we dominate the Valley of Vaipee. 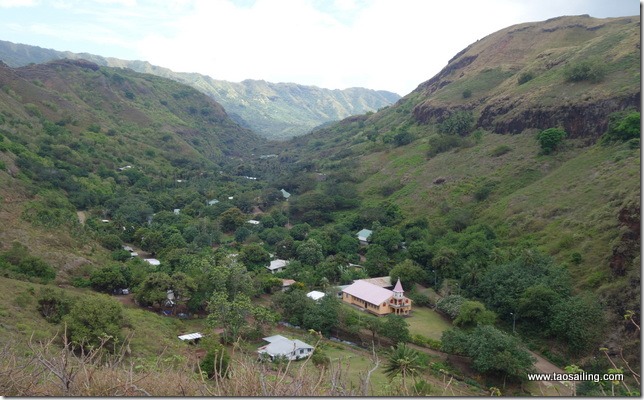 Along the way we meet a few goats absolutely not frightened by our presence, then a few isolated houses before joining a Green Valley. The sky darkened and it is when we come to the edge of the beach that it starts to rain. We have just the time to freshen up with a coconut and... 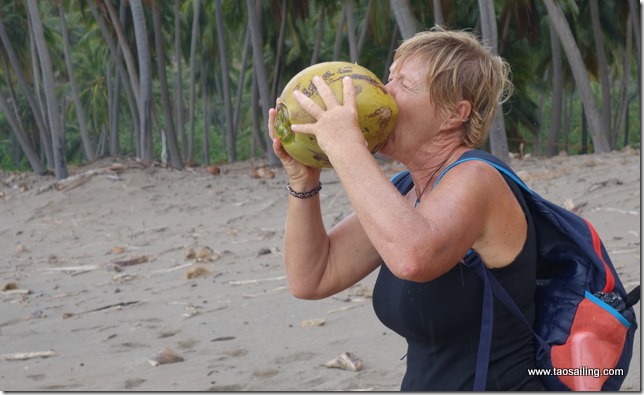 check if there is Internet. It's the rain that we do a half turn after picking up a few lemons! 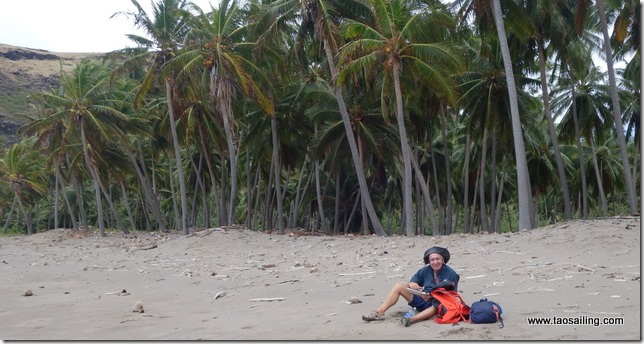 The entrance to the Bay is no longer blocked by the Aranui , We decided to go to Hane located at 5 East. We get wet on a sandy bottom, protected from the swell by "Motu Hane". 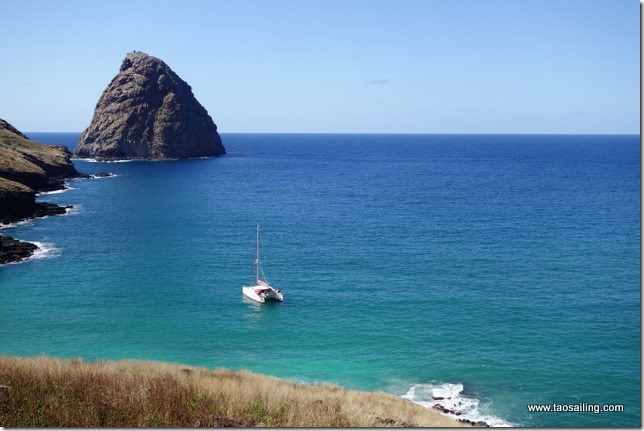 The only way to go ashore it is Kayak and we identify the boat the best passage where the waves breaks least. 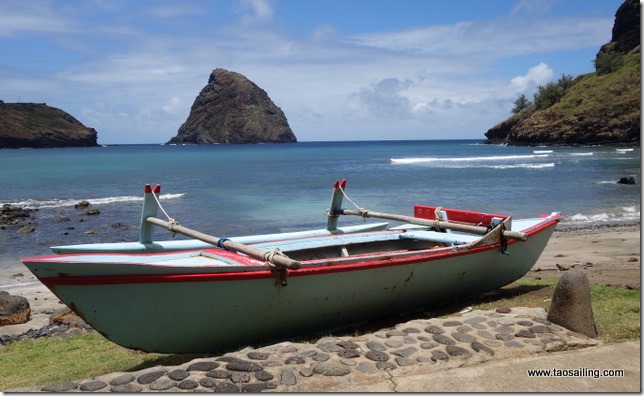 In the village, We certainly have to stop in the position which is the only place (as in most of the Islands) where you can have an internet connection. 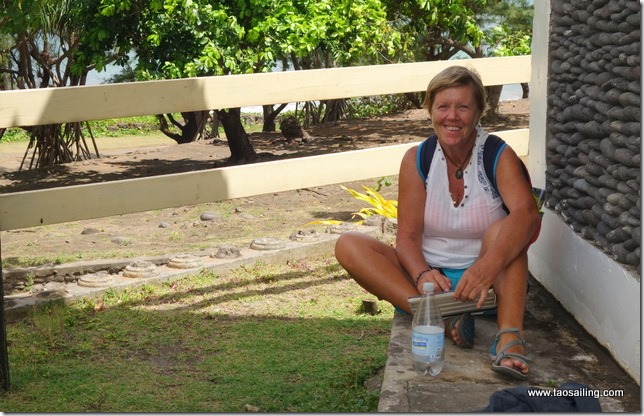 Joseph, who lives not far from the Museum of the sea opens its doors. Canoes and a little craft are exposed. 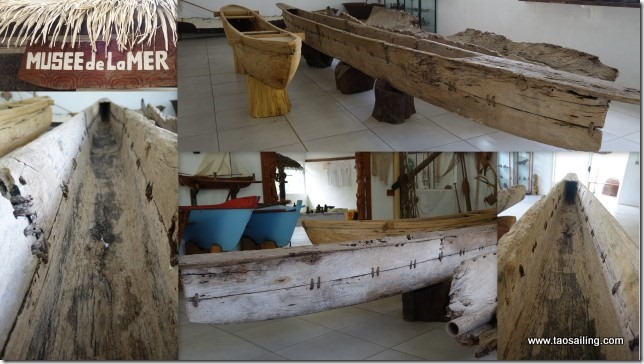 We continue our walk towards the village of Hokatu. 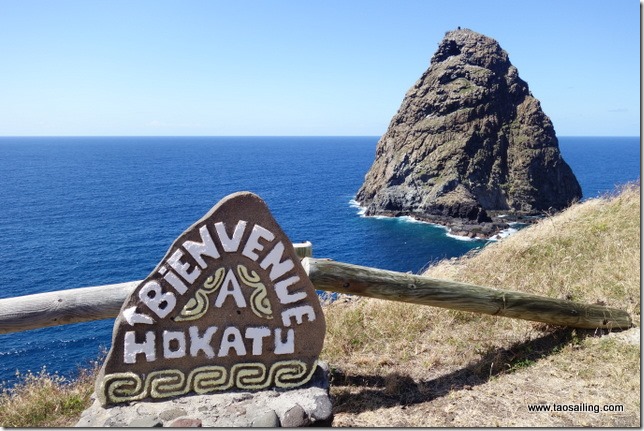 Village green and flowery, but where it is not really possible to get wet because of the Fund too Rocky and a constant swell who rushes into the narrow Bay.

We do a quick tour at the Museum of stone with a replica of the "Tiki whale" at the entrance. The legend says that this Tiki (who has been found that a Ua-Huka) was attached to the front of the boats fishing and that when it stood and fell through it was the right place for fishing boats... back to the village were responsible for fish, and the "Tiki whale" had already returned home!  We bought a rosewood... and three days later we took a Kingfish of more than 1.50 m!  The freezer is full, Thank you Tiki-whale. 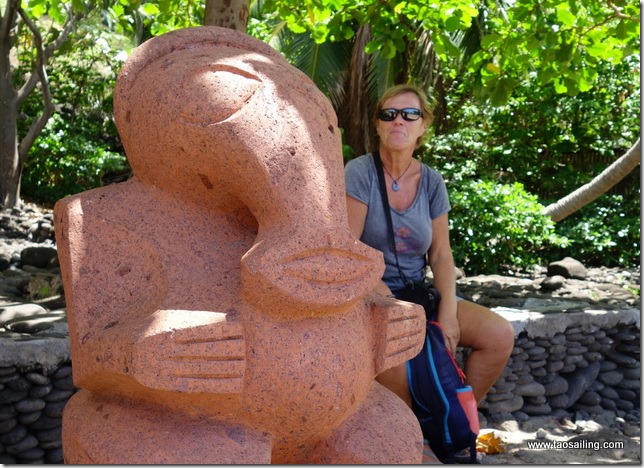 In the village a person talks a trail allowing to return to Hane by forest which covers the surrounding mountains. Although longer, We decide to venture there because much more pleasant than the road.

It is sometimes a little steep, Sometimes a little muddy... but the walk in the rainforest is beautiful. Feels a little Explorer... especially when a resident across the road will tell us more later that he didn't e never ventured in these mountains! 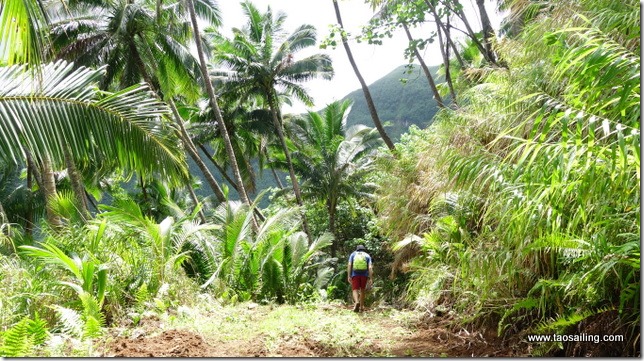 In the descent to Hane we make the detour to the Marae which overlooks the village. Its old stone Tikis must protect the village... 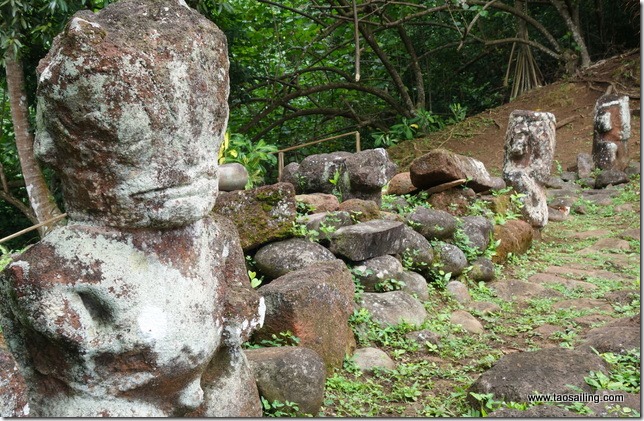 One last picnic on the edge of the water before we continue our road to the north side of Hiva-Oa... 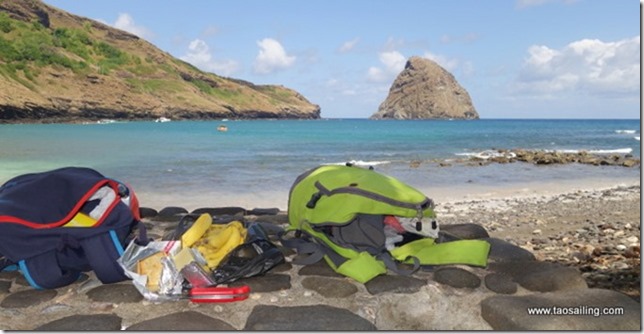