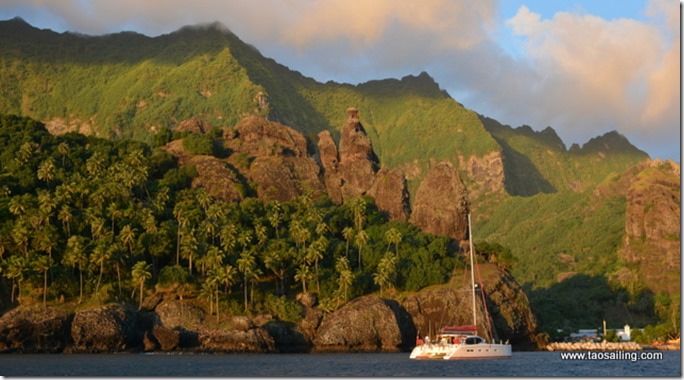 During our first visit to the Marquesas in December 2014, We could not visit the island of Fatu Hiva, the Bay of virgins (Hanavave), because of the swell. We look forward to discover this place( and its inhabitants) reputed to be one of the most beautiful landscape of the Marquesas!The weather is favorable to reach the island of Fatu hiva. A constant of wind 15 nodes takes us up to the Bay of Hanavave, whose entrance is not easy to identify the wide. Already Nathalie activates on the bridge! And Yes everyone its role on the boat, While one is in the bar the other restores order in the ropes and prepare the anchorage.

The island of Fatu Hiva is the result of 2 volcanoes nested one inside the other. A circular Valley, sometimes close, between the first crater and the cone of the second. The vegetation is particularly dense and green. 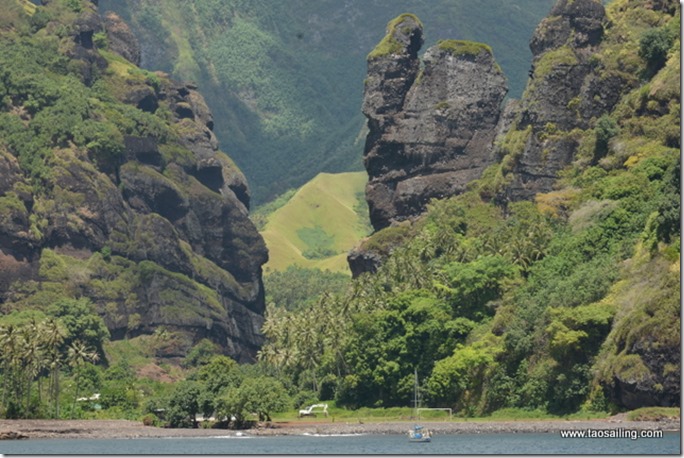 The Bay is enclosed, the gusts of wind that into the Valley are unpredictable and violent. We cast anchor in 10 m deep, at the foot of the majestic peaks formed basalt, which the highest point is 1000 m. Every night there seems to be a competition between goats, to know which will be the highest on these quasi-verticales walls. 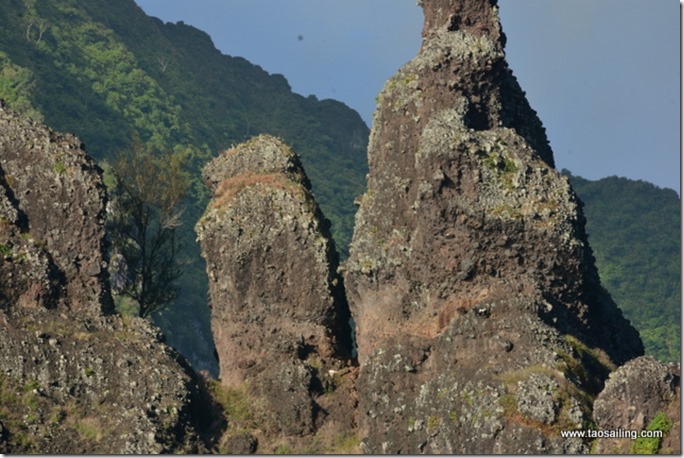 These rock formations at night light up yellow, ochres and reds. Until the Sun disappear on the horizon, we jump in the annex to take some pictures. 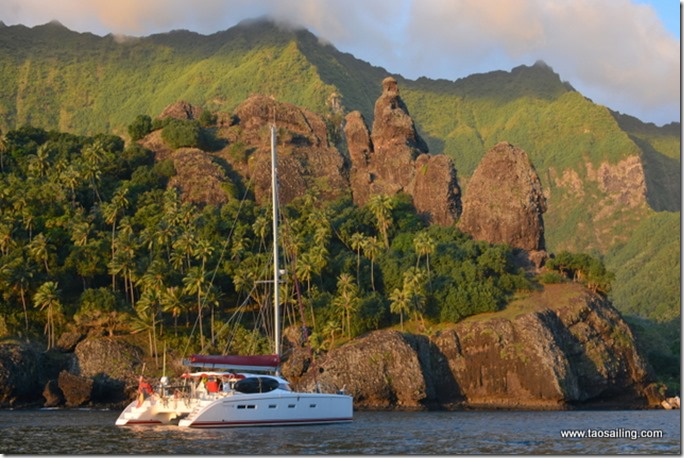 The next day we go ashore, We don't risk losing us there is only one road, a few houses bordered... 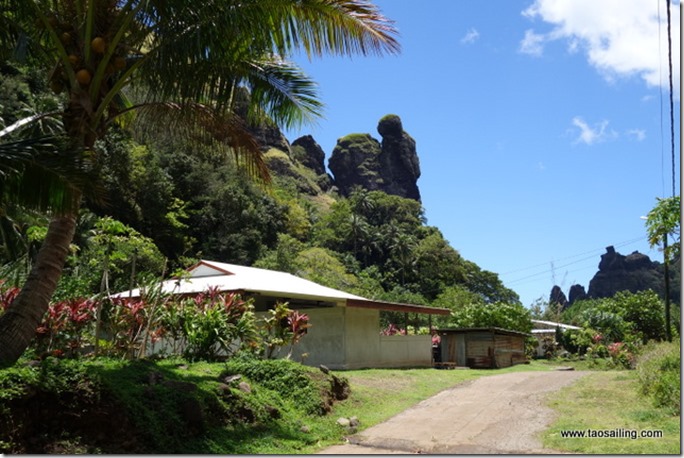 the Church plate (who had to undergo a few weather) the post office and a grocery store.Along the way we meet the inhabitants and everyone asks us: "That's what you have to share on your boat; ropes, lures, clothes...?"A little caught off guard and not used to this kind of 'trade' in Polynesia, We review what we have to make them happy. This is a practically new wax that we give to Christian. He proposes the Tikis and other sculptures, but we expect nothing in return. He insists and leave with some grapefruit garden. 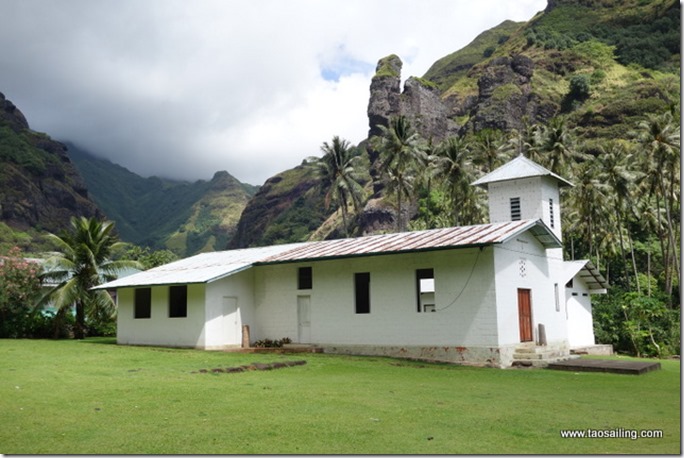 A beautiful day s”' ad it's time to go for a walk to the waterfall. 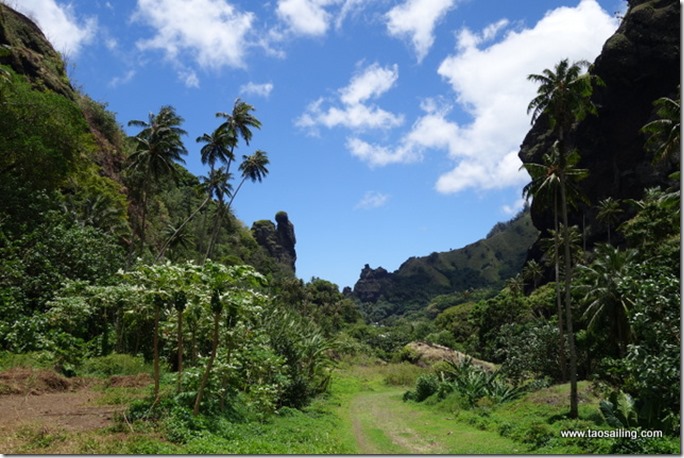 We follow the river whose level is not very high, 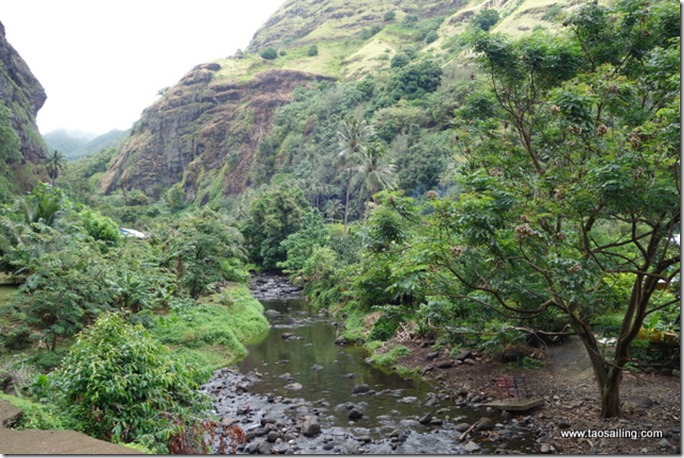 then we go into the Sub cool and wet wood that we cool. After 1 hour of walking the waterfall is found despite the explanations of Christian. We have missed the fork!! Indeed we meet the young trying to cut cashew wood for their sculpture, They show us the direction. 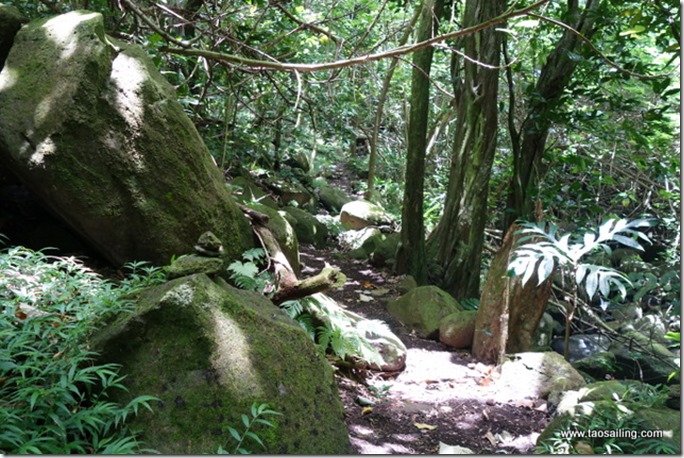 On the river, a cairn indicates the way to go rather than cross it. But the cairn of the collapse! 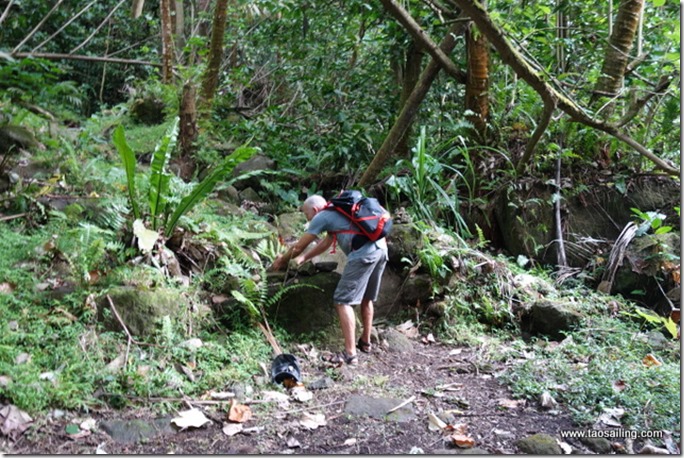 Philippe is a visible landmark for hikers coming. 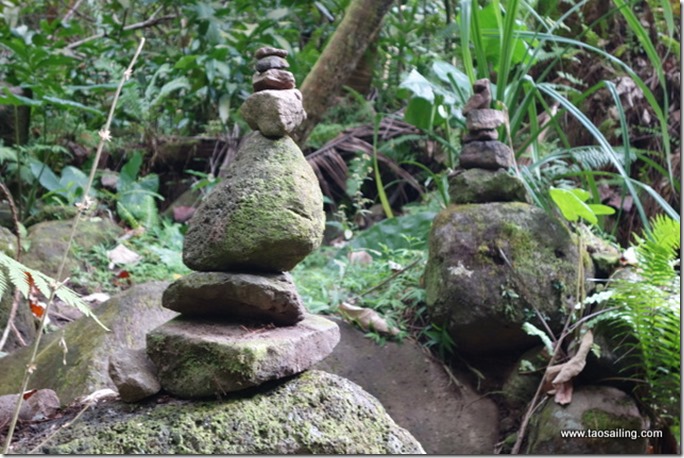 At the end of 20 minutes we arrive at the foot of the waterfall which gives dizzy just looking at its Summit. Despite recent rains, his flow is weak. 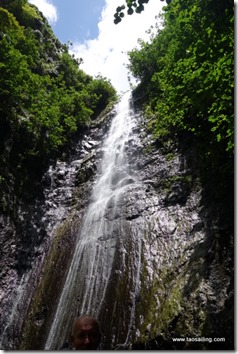 On the way back we ask if we can pick up some green papayas. Papaya is eaten grate or well cooked as a green vegetable salad is delicious! 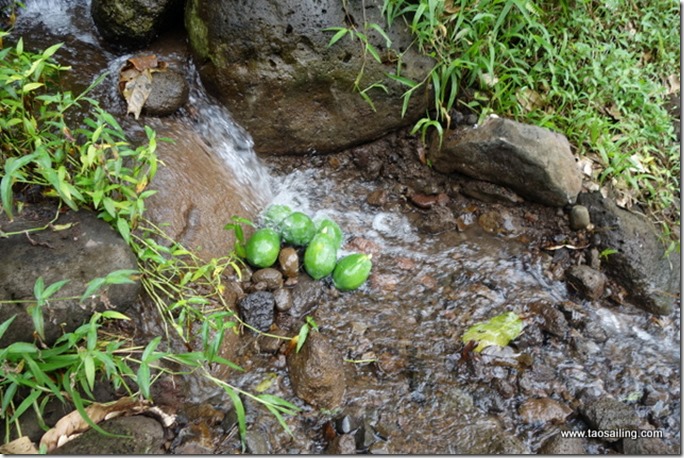 Hunters regularly to train young dogs to swim as long as possible.

Today the pier columns are decorated with palm leaves and the Tiki wreathed with flowers, 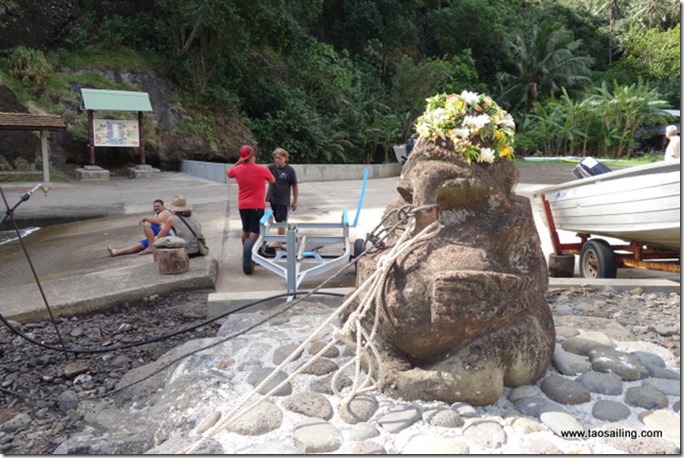 It's to welcome the 200 tourists of the "Boréal" boat.

We are witnessing the dances organized for tourists, 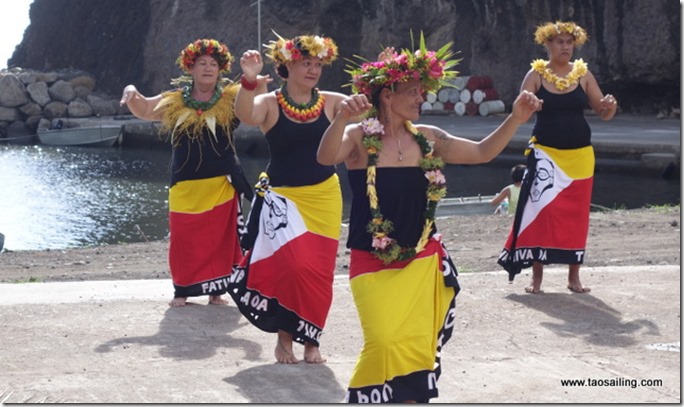 accompanied by songs Marquesans and punctuated by ukulele and guitar.A small crafting table is installed with a few wooden sculptures and tapas (painted wood bark). Tourists rush on it, the prices are more expensive than in all the islands of the Marquesas. 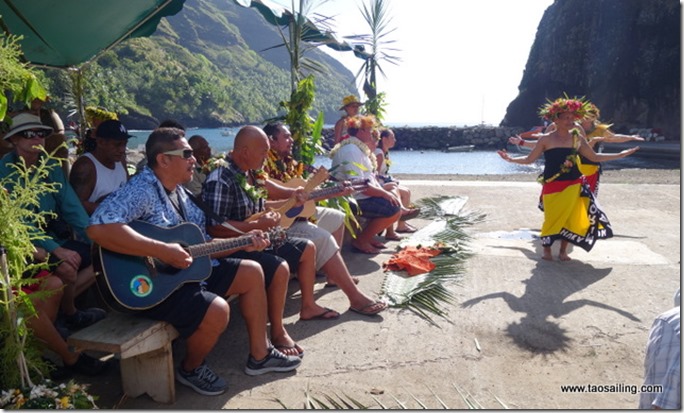 Tomorrow we return to Tahuata where we're expected in the village of Hapatoni...