2 lithium batteries… Y' has no picture! 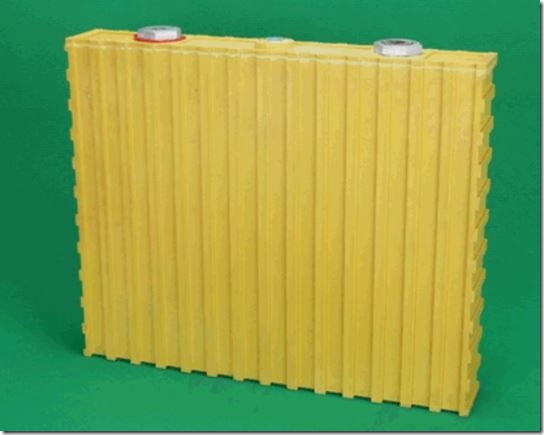 See performance clearly superior to those of the lead-acid batteries, the lithium battery (LiFePo4) seems the best choice for the boat service batteries. But they are very sensitive to certain parameters that must master before embarking on this adventure.

Benefits of the compared with the lead-acid batteries lithium batteries :

The manufacturers promise a lifetime of 4000 cycles or more 80% DOD. Tests over several years in intensive actual use show that after 770 cycles, in optimal conditions (We will cover this later), a fleet of lithium batteries has lost none of his ability. It seems reasonable to expect 2000 cycles to 80% DOD, It's not bad, and on a boat that would correspond to more of 15 years!

This is compared to the 400 to 500 cycles to 50% DOD promised for the best lead batteries (AGM, Golf…). I have never had batteries that made as many cycles before seeing their capacity reduced to shrinking and having to replace them! 200 to 300 cycles would be a maximum for these batteries.

This is compared to the 30 to 40% of the actually usable regularly for a lead-acid battery rated capacity - between 80-90% and 50% SOC. At the top of 80% SOC these batteries accept only a low current and be patient to achieve the 100% SOC.

So for the same usable capacity lithium battery weighs less one-third as a lead-acid battery. Its size is also divided by three.

A fleet of lithium batteries you alleviates 216 kg and frees up space in the vaults.

A lithium battery accepts virtually all the power that you provide and this current remains constant until almost a full load. With solar panels and regulator set to 3, 9V batteries are charged to almost 100% When the controller's mode "Absorption".. For optimal conditions it is advisable to charge a battery lithium with a maximum current of 0, 3 c (or 180A for a battery of 600Ah). Note that these batteries are used in electric vehicles and can be recharged with a current of 3 c (or 1800A for a park of 600Ah!!).

It is advisable to charge a battery with a maximum current of 0, 2 c (either 120A for a battery of 600Ah). When the battery is near the 80% SOC, its internal resistance increases quickly, the current drops strongly... and it takes several hours to complete the load.

Below a graph representing the voltage (V) based on the percentage of charge (SOC) and the current. This is for a 3 cell, nominal 2V (It takes 4 to a 12V battery). 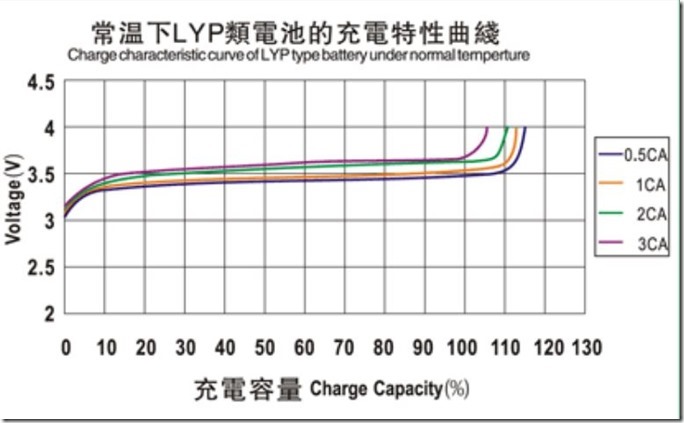 Using my new lithium batteries between 5% and 80% DOD, the tension passes of 13, 2V to 12, 4V. In addition this tension varies little when big consumers set out (freezer, pilot, windlass, Electric winch…). Since as they service my screen Raymarine made more of his (Flash, RAZ and other weird behavior) and my fridge/freezer no longer safe low voltage.

Below a graph representing the voltage at the terminals of a cell depending on the discharge (DOD) and the current. 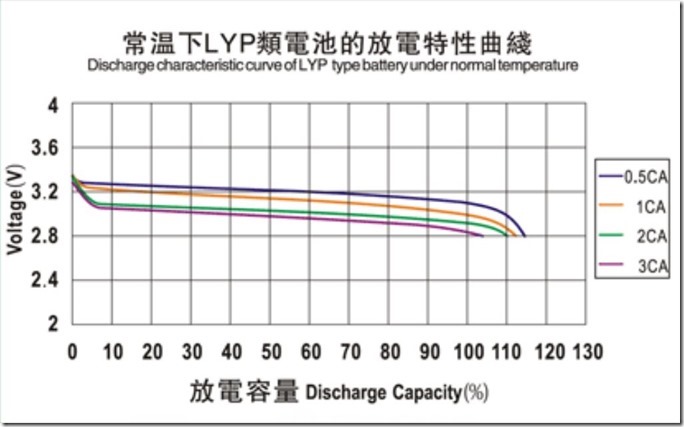 A lead-acid battery is prone to the phenomenon of sulfation and it is necessary to charge it to 100% as often as possible to reduce the effects… What is practically impossible on a cruising yacht which never sees a Terminal 220 Volts… where a loss of capacity of these batteries… and their quick death.

No sulfation for a lithium battery, so no need to charge it to 100%. In fact she will be better.

If you use a lithium battery 100Ah, need you to 100Ah for charging at the same level.

The capacity of a lithium battery is not or very few reduced by a strong current of discharge - type anchor windlass, Electric winch, desalinator.

No need to compensate the charge voltages to keep account of batteries above 25 ° C temperature.

With a rather low own discharge is not necessary to provide a support system when the batteries are stored for a few months. It is recommended to store them at 60% SOC and disconnect. 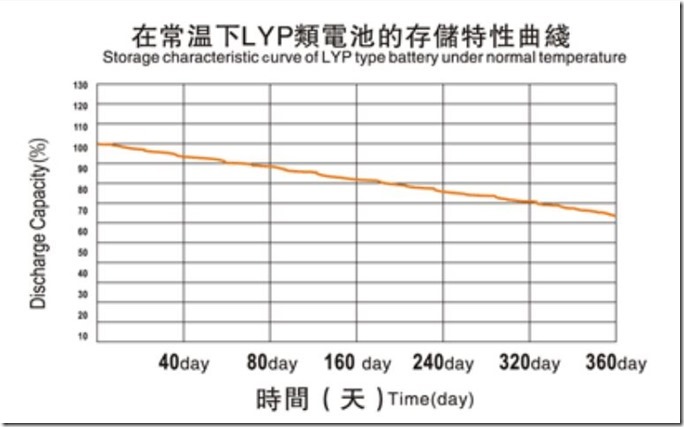 Constraints of the lithium batteries:

Read all these advantages we can wonder why our boats are not all equipped with these batteries... almost miraculous (compared with the lead-acid batteries)?

Because This isn't the "Plug-&-Play". If you just replace a lead by a lithium battery battery, There are chances that your alternator burn quickly and that the life expectancy of these batteries is very limited...

What to know before you buy batteries lithium:

Your Lithium battery performance will be severely degraded or the battery will be destroyed if you load too. Not only the electrolyte will boil, but the walls of the battery will warp irreversibly.

A too high blood pressure destroyed the battery.

As seen on the highest load curves, Once charged to 100% the voltage climbs very quickly... and the battery is destroyed. 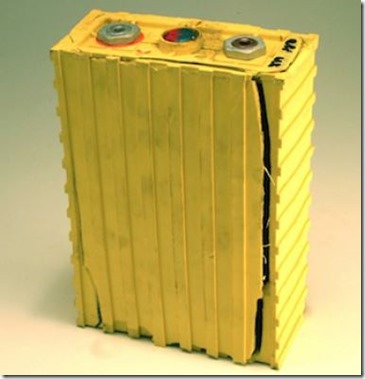 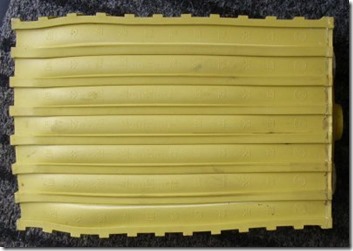 A too deep discharge will result in a reversal of polarity and the destruction of cells.

As seen on the highest discharge curves, below a certain level of discharge voltage collapses... and the battery is destroyed.

They can be used below 0 ° c., but never recharged when it freezes.

A Lithium battery of 12 volts is composed of 4 cells in series. Each cell has a nominal voltage 3,2 plug. It is imperative that they all have the same capacity and that they are loaded exactly at the same level before using. 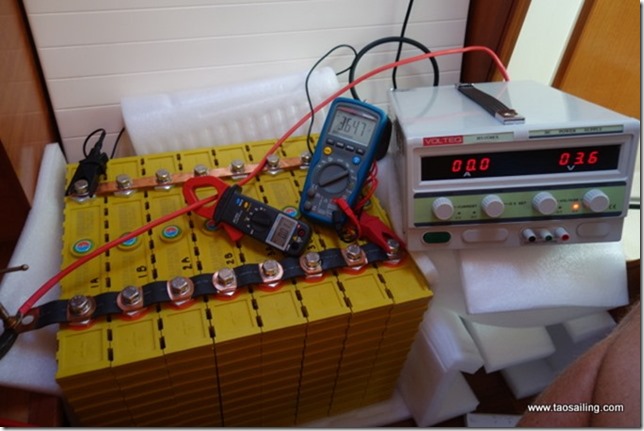 If the cells are not "balanced" (i.e.. they have not all exactly the same level of load):

And this happens in a few minutes...

6 -Do not rely on the manufacturer specifications

The Lithium batteries (LiFePo4) are primarily used in applications of electric vehicles where the currents are high and refills must be fast. Manufacturers therefore advocate extreme tensions (charge to 16 volts and discharge so far 11,2 plug) with currents up to 3 c (1800A for a battery of 600Ah). But those who did tests on the duration in use marine (and some have destroyed many farms) claim that it is not necessary to achieve these extremes and to stay well below to ensure the longevity of the batteries. For example, our applications, the voltage applied to the batteries should never exceed 14 volts and a load to 13,80 volts is enough to reach 100% SOC.

Unfortunately most of the Chargers, Solar controllers and regulators of alternators of trade are completely inadequate to charge a Lithium battery. Even those who have a setting for Lithium batteries can be dangerous for your batteries with charge voltages much higher than 14 plug. Which is not surprising if they are based on manufacturer specifications.

Never use the setting "Lithium" Chargers trade... unless you want to destroy your batteries.

My cells lithium 600Ah me have cost USD 3500, imported directly from China (What is in May about what cost 1300Ah of AGM batteries that will provide the same capability available). But to this must be added the cost of upgrade of all systems to load, the purchase of a battery management system (BMS - battery Management System) in order to protect batteries, the replacement of some cables and all the work to assemble the cells and redo many wiring. I believe that my investment in addition to the batteries is of the order of USD 5500, a total cost of USD 9000.

If we divide by two life announced by manufacturers, either 2000 cycles, the cost per cycle would be USD 4,50.

Assuming a life expectancy of 500 cycles for AGM batteries, the cost per cycle would be USD 7,00.

All batteries are dangerous!

LiFePo4 is the safest technology lithium. The Lithium batteries used in laptops or phones are far more dangerous and some are prohibited on planes! Synopoly tests were carried out on its batteries: short circuit, high temperatures, flames... without being able to make them explode. A number of precautions are necessary to avoid an accident when we think that a simple cell of 3,2 volts and 60Ah can provide more than 1800 in short circuit - to melt the spanner that has fallen over the battery.

These constraints are not insurmountable, but forget to think "Lithium battery" as a replacement for your current batteries. The battery is only a component of the system that will provide you announced any performance in ensuring your safety and preserving your investment. 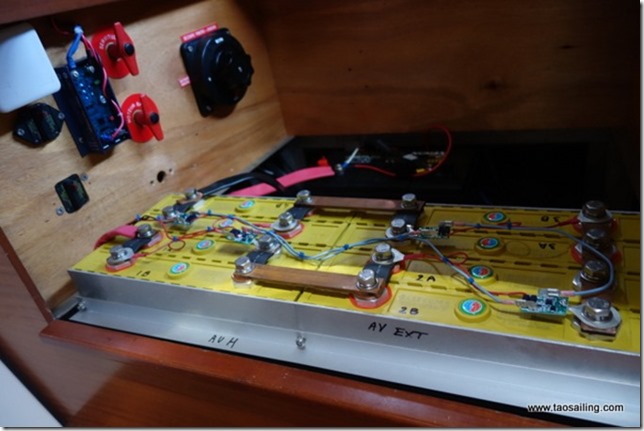 To design a "Lithium batteries" it is necessary to think about:

Optimal conditions for the Lithium batteries